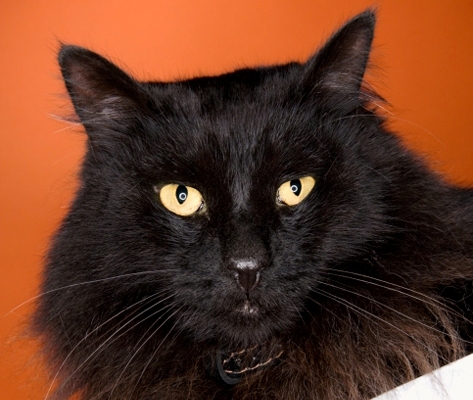 Let’s face it, black cats have had a bad rap for a long time. In some countries they are believed to have the magical ability to portend bad luck and death, which has led to them being neglected and abused by less than enlightened people.

Of course not all countries toe that line, though the black cat retains its magical abilities in Britain, Japan, and Scotland, where black cats are a symbol of good luck and prosperity; sailors of old preferred their « ship’s cat » to be black for the same reason.

Negative superstitions have changed for the better in most places, but black cats are still irrevocably linked to that darkest of holidays, Halloween. It’s no wonder then that shelters take extra precautions when adopting out black cats during the month of October, especially in the weeks leading to Halloween. But the better question is whether they should still worry.

“We used to have a policy where we didn’t adopt out black cats during the month of October, but we have since canceled that policy,” said Laurie Hoffman at the Humane Society of Greater Miami. “We take normal precautions with all our adoptions.”

“The bottom line is, we are trying to avoid any situation that may put a black cat into an unsafe environment,” Buchan said. “There are satanic sacrificial rituals that still exist in our country and around the world.”

Concrete statistics on black cat torture during October are lacking. In fact, many stories we hear are probably hearsay. The problem remains that these stories and the situations surrounding them can be self-fulfilling. Cruel or naïve people, especially young people, may hear stories of the ritual Satanic abuse of black cats and then go on to inflict harm on these defenseless creatures.

So if you happen to run across a similar ban on adopting black cats this holiday season, don’t become frustrated or upset. Shelter managers think of it as a better-safe-than-sorry policy. And who are we to complain about erring on the side of animal safety? They’ll still be there, waiting for you to give them a forever home in November.

Are Hydrangeas Poisonous to Cats and Dogs?