Calorie Counts Will Soon be Available on Pet Food Labels 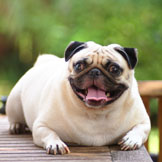 According to a report in the Journal of the American Veterinary Medical Association (JAVMA), calorie counts will be appearing on pet food labels, although the changes may not be evident anytime soon.

Current AAFCO (Association of American Feed Control Officials) regulations only recommended that such information be presented for “diet” dog and cat foods. Some manufacturers include calorie counts on the labels of all of their foods, but others do not. Veterinarians and owners who need this information to determine how much food to offer their patients and pets currently have to contact the companies directly, which is inconvenient under the best of circumstances.

According to the JAVMA report:

The Association of American Feed Control Officials is adding the new labeling requirement to its 2014 model feed regulations, on a proposal from the American College of Veterinary Nutrition. Although AAFCO has no regulatory authority, most states follow the model regulations.

“We felt it was very important information for the label, similar to calorie statements on human food labels,” said Dr. David A. Dzanis, ACVN secretary and a regulatory consultant, “one, to address obesity, but that’s not the only issue. I think that information also is important for working dogs, dogs and cats in gestation and lactation, growing puppies and kittens. You need to know the calories in order to make good feeding decisions.”

In January, AAFCO approved the change. Labels will have to list kilocalories per kilogram of food and kilocalories per a common unit of the food, such as a cup or a can. The labels also will have to specify the method by which the manufacturer determined the calorie content, either by calculation or by a feeding trial.

Jan Jarman, co-chair of the AAFCO Pet Food Committee and a commercial feed consultant for the Minnesota Department of Agriculture, said the new labeling requirement protects consumers by helping them make more meaningful comparisons between foods.

She said the change safeguards animal health by making it easier for pet owners and veterinarians to determine the right amount of food for pets. The change protects industry by leveling the playing field for claims relating to calories.

The new labeling requirement also covers pet treats. Jarman said products with less than a certain number of calories originally were going to be exempt, but the final thinking was that the common use of treats necessitated calorie information.

States will take time to adopt the new labeling requirement, Jarman said. The AAFCO Pet Food Committee also recommended that states not enforce the regulation for 18 months on new products and for three years on existing products to give companies time to change labels.

Hopefully pet food manufacturers won’t take the full three years to comply with the new regulations. Obesity is such a huge health problem for our companion animals that we need to do everything possible to combat it… sooner rather than later.