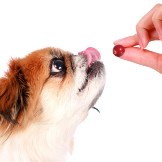 Cranberry has a reputation for treating/preventing urinary tract infections (UTIs). Do a quick online search and you’re sure to run into myriad reports of miraculous cures. It certainly would be wonderful if something as simple as adding cranberry to a dog’s dietary regimen could prevent urinary tract infections, but what does science have to say on the matter?

First, cranberry does not work (if it works at all) by acidifying the urine as you might have heard. Instead, it seems to have a potential effect on the ability of some types of bacteria to stick to the bladder wall. Free floating bacteria will be flushed out of the bladder the next time a dog urinates, while those that can attach themselves to tissue can remain, replicate, and result in a clinically significant infection. I don’t find studies showing that cranberry disrupts bacterial biofilm or bacterial growth in a petri dish all that helpful, though. What I want to know is whether or not I can expect it to have a significant positive effect in my patients.

Very little research has been done that can directly answer that question with regards to dogs. So as is all too often the case in veterinary medicine, we have to turn to studies that have been done in people to shed light on the subject. In this case at least, I think there should be a fairly good match between the results in people and those that might be expected for dogs, because the important underlying factors that result in UTIs are similar between species.

The most authoritative paper I could find on the subject is a review article that was published in October 2012. The authors looked at 24 studies (10 of which were included in a previous report plus 14 new studies) with a total of 4,473 participants to “assess the effectiveness of cranberry products in preventing UTIs in susceptible populations.” They came to the following conclusion:

Prior to the current update it appeared there was some evidence that cranberry juice may decrease the number of symptomatic UTIs over a 12 month period, particularly for women with recurrent UTIs. The addition of 14 further studies suggests that cranberry juice is less effective than previously indicated. Although some of the small studies demonstrated a small benefit for women with recurrent UTIs, there were no statistically significant differences when the results of a much larger study were included. Cranberry products were not significantly different to antibiotics for preventing UTIs in three small studies. Given the large number of dropouts/withdrawals from studies (mainly attributed to the acceptability of consuming cranberry products particularly juice, over long periods), and the evidence that the benefit for preventing UTI is small, cranberry juice cannot currently be recommended for the prevention of UTIs. Other preparations (such as powders) need to be quantified using standardized methods to ensure the potency, and contain enough of the ‘active’ ingredient, before being evaluated in clinical studies or recommended for use.