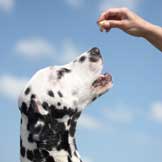 Dalmatians … a gorgeous breed, no doubt, but one that has resulted in dogs with more than their fair share of health problems.

Dalmatians carry a genetic mutation that alters the way in which they metabolize and excrete substances called purines, which are found in many foods, especially meats. Normally, excess purine is broken down via the following pathway:

Virtually every Dalmatian lacks the ability to perform step four, therefore their urine contains unusually high levels of uric acid. All of them do not go on to form medically significant stones, however. I’ve seen estimates that say approximately one-third of male Dalmatians develop urate stones that require medical attention. The percentage is smaller in females, perhaps because they have wider urethras allowing them to pass small stones unaided.

The good news is that urate stones in Dalmatians can often be treated and prevented with dietary modifications and medications. In other cases, surgery to remove the stones is necessary, but as long as the dog is able to urinate freely and can be kept comfortable while the stones are present (it usually takes 2-3 months for the stones to dissolve), medical treatment is certainly worth a try. Protocols involve:

Once a Dalmatian has had urate stones that have been cleared either through medical dissolution or surgery, the focus turns to prevention. Some dogs can be managed on a low purine diet, increased water intake, and a urinary alkalinizer. Canned, commercially prepared foods designed for dogs with or at risk for urate stones typically cover all three of these factors; so could a homemade diet designed by a veterinary nutritionist. But sometimes diet alone isn’t enough.

Close monitoring through frequent urinalyses and blood urea nitrogen measurements can determine whether treatment failure is caused by the dog eating high purine foods, the need for more fluids or urinary alkalinizers, or if long term use of allopurinol might be called for, despite the associated risk of xanthine stones.

Treating and preventing bladder stone formation in Dalmatians is nothing if not a balancing act.