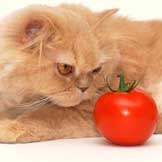 Did you hear about the case of the Australian kitten that nearly died from being forced to eat a vegan diet? According to an article in the Herald Sun, its owners fed it potatoes, rice milk, and pasta. Unsurprisingly, the cat became very sick:

« It was extremely weak and collapsed when it came in. It was almost non-responsive, » Dr Pinfold [the cat’s veterinarian] said.

The kitten was given fluids via a drip, placed on a heat pad and fed meat.

It remained in hospital for three days after which the kitten’s owners were given meat to feed their pet at home, she said.

I just don’t get it. Cats are carnivores — they’re from the same biological family as lions, tigers, jaguars, and mountain lions. There’s nary a vegan in the bunch!

Don’t get me wrong. I greatly respect a person’s choice to adopt a vegan lifestyle. Done well, veganism promotes good human health, the environment, and animal welfare. I am not a vegan myself, but I am a vegetarian who tries to limit what animal products I do purchase to those that have the least negative impact on my health and the world around me.

I don’t eat meat but my cat does.

Cats require nutrients that come from animal tissue. Chief among these are the amino acids taurine and niacin, the essential fatty acid arachidonic acid, and vitamins A, B1, and B12. Cats also need to eat more protein than do dogs or people, and these levels can be hard to reach with a vegetarian diet, or particularly a vegan diet. Cats that don’t get adequate amounts of protein, taurine, niacin, arachidonic acid, and vitamins A, B1, and B12 in their diets are at risk for eye disease, skin and coat problems, blood clotting disorders, immune system dysfunction, poor growth, weight loss, inflamed gums, diarrhea, neurologic disorders, and death.

Is it technically possible to design a vegetarian or vegan cat food that won’t make a cat sick? Yes, it probably is. A veterinary nutritionist could come up with a recipe that combines just the right proportions of protein and fat from plant-based sources with amino acid, fatty acid, and vitamin supplements (although it can be hard to find some of these that don’t have animal origins), but I have my doubts as to whether or not this type of diet would be ideal for cats. Good nutrition is more than just the sum of all its parts. To think we can concoct in the lab what nature has perfected over tens of thousands of years borders on hubris.

Don’t bring a cat into your home if feeding it meat is going to be an issue. You have a choice. Get a rabbit, bird, rat, chinchilla, goat, or other natural vegan instead … or even a dog. No, dogs aren’t vegetarians or vegans either, but at least they are not the obligate carnivores that cats are. I’ve met many a “veggie” dog that is thriving. I can’t say the same for cats.