What to Feed to a Sick Dog 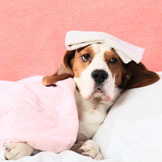 What do you think of the saying, “Starve a fever, feed a cold”? On one level it makes sense. The fever, in this case, is indicative of an infection that is provoking a generalized immune response. Fighting the infection needs to be the body’s focus, not obtaining, digesting, and absorbing food, all of which requires the expenditure of energy and other resources. On the other hand, the fever itself increases the dog’s caloric and other nutritional requirements, so given enough time, not eating is going to take a toll on the body’s ability to mount an effective immune response.

When I’m treating a dog who has a fever I’ll respect his desire not to eat for several days as long as he has been on a good plane of nutrition previously. Dogs can go for a few days without food and avoid developing adverse biochemical and physiological effects (unlike cats). I also expect to start making inroads against whatever is causing the dog’s fever within that time, so hopefully the dog will start feeling better and eating on his own. If, however, that does not happen, we eventually reach the point when directly addressing the dog’s poor appetite becomes necessary.

I usually try to steer clear of medications that have the sole purpose of bringing down a dog’s temperatures unless it is so high that it becomes dangerous in and of itself. Fevers serve a purpose. Some parts of the immune system work better at higher temperatures so a fever can increase the chances that the dog’s immune system will be able to fight off invading microorganisms. But after a dog has not been eating for a few days, I feel that the benefits of fever start to be overwhelmed by the downsides of poor nutrition. In these cases, I will use a nonsteroidal anti-inflammatory (as long as it is not contraindicated based on a dog’s health status and/or the use of other medications) so the dog can feel better and hopefully start to eat.

During this time, I’ll also offer the dog special diets designed to be fed to sick animals. These products have several benefits over “regular” dog food. First of all, they are extremely palatable; dogs that have some appetite left are often unable to resist them. Secondly, they are very nutrient dense. Dogs do not have to eat much to receive a big nutritional boost. The high nutritional density also reduces the amount of work the digestive tract has to do, allowing the body to continue to focus on its immune response. Finally, many of these products have a soft and wet consistency. Dogs can lap at them or even be fed via syringe or feeding tube, if necessary.

We should never “starve” a fever in the sense of preventing a dog who wants to eat from doing so. Temporarily, there’s no harm in giving him the discretion to decide whether or not food should be a high priority, but after a few days, it’s time to intervene.

Appetite Stimulants for Cats – When Cat Will Not Eat

No Result
View All Result