What You Don’t Know About Mushrooms Can Kill Your Dog 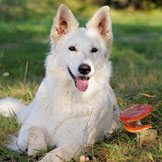 One of the saddest cases that I can remember from more than 15 years of practicing veterinary medicine involves a dog that died after eating mushrooms her owners had collected from the woods. The owners were hunting for morels, a non-toxic (and delicious) type of wild mushroom. They had gathered an awful lot of them, put them in a pile on the ground, and while their backs were turned, their dog ate them all.

Being very conscientious, the owners immediately brought the dog in to my veterinary clinic, but the trip took quite awhile. First, they had to hike out of their remote location and then make the long drive to town. When they arrived, one of my coworkers took charge of the case but all the doctors who were on that day were at least tangentially involved. The first question that arose was, “could morel mushrooms be toxic to dogs?” After some research we determined they were not, but since the dog ate so many, GI (gastrointestinal) upset might be expected.

Adding to our uncertainty was the question of whether we could be completely certain that the owners had truly collected only morel mushrooms or whether a few toxic varieties could have been included in the batch laying on the ground. Also, the dog was currently receiving chemotherapy for lymphoma, but was in complete remission.

Better safe than sorry, we thought, and the doctor on the case made the dog vomit (up came some partially digested mushrooms but most had already entered the small intestine), gave her a couple of doses of activated charcoal, and started her on IV fluids.

Everyone was pretty jovial for the first few hours of the dog’s hospitalization. We all thought she would be fine, but fairly quickly it became obvious that would not be the case. Within a few hours the dog was decidedly unwell. She had become depressed and lethargic, had vomited a few times, was drooling, and her belly was painful. Upon closer examination, her pupils were constricted and her heartbeat was slower than expected. All of these symptoms are classic for a severe poisoning with the type of mushroom that absolutely destroys the liver. Despite everyone’s best efforts, the dog soon died.

We were never able to determine exactly what happened in this case. Was there some unique syndrome brought on by the massive amount of normally non-toxic mushrooms the dog ate? Did her lymphoma/chemotherapy play a role? Did the owners inadvertently include a toxic mushroom in the mix … perhaps a false morel which can be difficult to distinguish from the nontoxic variety? I believe this last scenario is most likely, and while it probably doesn’t bring the owners much solace, I like to think that maybe, just maybe, the dog’s last gift to her owners was to save them from their own mistake.

Never, ever allow your dog to eat wild mushrooms. Theoretically, mushrooms from the supermarket should be okay, but after this experience, I can’t even bring myself to recommend those.