What Your Pet’s Lifestyle and Diet Says about You 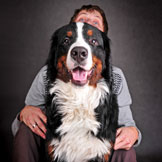 I’m sure you’ve heard the adage about how dogs and their owners often look alike. Turns out we also often share diet and lifestyle characteristics, particularly as we get older.

A 2011 study looked at similarities and differences in diet and lifestyle between 155 cat and 318 dog owners and their pets. It came to some interesting conclusions.

Eighteen percent of the dogs were reported to be overweight, which is probably a significant underestimate since owners are notoriously bad at recognizing whether or not their pets are plump. Current, unbiased estimates put the number closer to 55 percent in the United States. Forty-nine percent of the dogs had access to food at all times — an unexpectedly high number, I thought.

Overweight dogs tended to have overweight, older owners. Not surprisingly, these owners and dogs both tended to suffer from poor health. Also, “younger dog owners were more likely to have an overweight dog if they themselves were obese. Similarities were found in owner’s and pets’ diet and lifestyle issues with ageing.” The older dogs got, the less exercise their owners tended to get, the fewer fruits, vegetables, and whole grains they (the owners) ate, the more added fat they (the owners) ate, and the higher the owner’s body mass index tended to be.

Cats and their caregivers didn’t fare much better. Fourteen percent of cats were reported to be overweight (again, almost assuredly a significant underrepresentation since current estimates are around 54 percent in the U.S.), with 87 percent having access to food at all times. Overweight, older owners tended to own overweight cats. The same trend was observed in younger cat owners but was not statistically significant.

All of these findings are correlations; in other words, characteristics that are associated but not necessarily caused by one another. That said, owners do tend to project their own behaviors, likes and dislikes, etc. onto their pets. Sometimes, this can be for the good. For example, a person who enjoys jogging may assume, rightfully so, that their dog likes to accompany them. On a cold or damp morning, when an extra cup of coffee and a donut sounds much more appealing, these owners may drag themselves out the door to avoid disappointing the dog. On the other hand, owners who turn to food for solace or to relieve boredom and don’t put a high priority on a good diet and regular exercise are unlikely to encourage healthier habits in their pets than they practice themselves.

I’m sure all of these factors are part of the reason why it can be so difficult to achieve meaningful weight loss in overweight dogs. Poor nutritional choices and exercise habits are often a family-wide problem. I wonder if there’s a need for veterinary and human nutritionists to team up and address the needs of the entire household. What do you think?